This is the economic circle: on improving upon your sporting strength, more fans will come to the stadium and will follow you on-line and on TV, which makes you more attractive for sponsoring, and additional revenues will enable you to invest in the sporting strength. Or the other way around, a decline in sporting strength will make you perform worse on the other dimensions too.

Now this may seem like a virtuous or vicious circle, either taking you through the roof or down the drain. But there are limits. 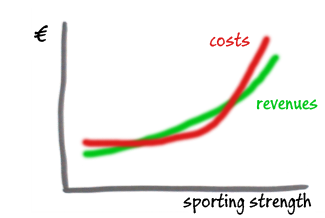 Playing at a higher level requires investments in the squad. As always, quality is expensive. And outstanding qualities are even more expensive. A club that is already very strong, can improve only by hiring exceptionally talented players, and has to pay them accordingly.

On the bright side, by playing at a higher level the club will also attract larger attendances and more sponsors. Quality enhances renvenues. But the economic resources of the club’s catchment area, from which the club draws its fans and sponsors, aren’t inexhaustible. At some  point, even though on the sporting dimension the club is still making progress and costs are rising, revenues won’t increase accordingly.

At first enlargement of the catchment area might make up for this, but in the end football is quite a local business: Real Madrid will never have many fans in Barcelona. This means that there is an upper limit to the club’s economics.

There are limits to a club’s ambitions, not just an upper limit, but also a lower limit, below which the club is performing so poorly that it loses too many fans and sponsors even though costs are low.

Critical success factors that determine these boundaries are: