We are – like millions of Dutch people – sports fans. This is why we work on the sport economic issues of our clients with passion. Most of our clients ask our support for the development of competition models, ranking systems, prognosis of the effects of a renovation of a football stadium, the distribution of costs and benefits and/or strategic decision making in sports.

“The circle of success is our success” 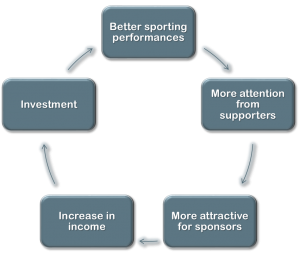 Market potential What will be your attendance when you perform at a higher level? If you reduce costs, how will it affect the attractiveness and revenues? Hypercube correlates the defining aspects of sports events with their catchment area. With a clear view on the market potential, you can determine your strategy. A football club draws […]

When the sporting quality and the attention for the competition are declining, one way to reinvigorate the competition is to change its format. Hypercube is renowned for its capability to help you with this reform, however modest or radical. Our approach We help you think up innovative formats. Are there too many matches in the […]

Stadium development is like a jigsaw puzzle. Hypercube analyses the optimal capacity, sets up a business case, continually checks the feasibility of the plans, and manages the process and the expectations of all stakeholders. The club will benefit from modern facilities and an appropriate capacity, but will also face higher costs. Typically, the rent from […]

This is the economic circle: on improving upon your sporting strength, more fans will come to the stadium and will follow you on-line and on TV, which makes you more attractive for sponsoring, and additional revenues will enable you to invest in the sporting strength. Or the other way around, a decline in sporting strength […]

Hypercube develops models to assess the media and TV-audience potential for all European leagues. Based on the analysis of TV and media audience potential for leagues we gauge the value of the media rights. This enables event or league owners to maximize their income through their negotiations with broadcasters. Through our models we contributed to a marked […]

The circle of success is central to most of our projects. This circle shows that sporting quality is of influence on commercial benefits and vice versa. In other words: changes to one of the elements leads to changes in all others elements. There are some limitations. One of the most important limitations is related to the environment of the sporting organization at hand (i.e., catchment area). That is, when fewer people are living in a specific area, less might be expected from fans for example.

Hypercube is an expert in providing insight in the optimum functioning of the circle of success for sporting organizations. We use data to predict how the elements change under influence of a decision. For example, what happens if you decide to spend more money on sporting quality instead of investing in the stadium (read more here)? What is the effect of another competition model on the number of TV spectators (read more here). Hypercube predicts the impact for your sport organization via simulations!

High quality and commercially interesting competitions
We have been working for 20 years on designing the best competitions for leagues in Europe. Most of our clients are active in association football, but we also have clients in other sports such as volleyball and tennis. Designing the best competition is related to several aspects. One might think of differences in sporting strengths between teams and/or the number of teams allowed to take part. Rule of thumb for a good competition is to pick a model that fosters as much matches as possible when something is at stake for at least one of the playing teams. We consider matches as relevant when teams compete for a championship, against relegation or for a better starting position in the pool. Excitement for players and fans is the key element for an interesting competition from sporting and commercial perspectives. Look here for examples.

Fair and transparent rankings
Which country is currently the best in the world? Is it the World Champion or the Olympic Champion? What does it mean when those tournaments have been played almost 3 years ago? Since you want to be able to determine the best country or the best team at any moment in time and follow their developments, fair and transparent rankings are crucial. For that reason, Hypercube develops rankings for its clients.

For association football, Hypercube has even developed her own ranking, called the Euro Club Index (ECI). The principle used is the “zero-sum system”. This system is based on the principle that points can be won and lost during every game played. The number of points that can be won or lost depends on the sporting quality of the teams playing against each other. Sporting quality is determined on the basis of historical data. The number of points is determined by comparing the actual result (win or loss in the match played) with the expected result (based on historical data). Want to know more? Take a look at our Rankings page here.

Distribution of media benefits
Sports is emotion, but sports can be big business as well. Distribution of media benefits – as main source of income – is crucial for almost all sports organizations. A fair and transparent distribution is thus of high importance. Based on data, Hypercube is an expert in calculating the effects of (changed) distribution systems. What does it mean for team A, team B or team C when they benefit less? What does it mean for the entire competition when the distribution system is changed? For an example see here.

Analysis of potential
Every club wants to perform as good as possible. These possibilities are restrained by the budget of teams, which is restrained by other factors such as the stadium and the catchment area. By analyzing the sporting potential of clubs, Hypercube determines which sporting achievements are feasible. Feasibility is determined by calculating the costs at different sporting levels (expressed in ECI points). By taking limiting factors into account, a balance between costs and benefits per sporting level can be displayed. These prognoses are made over a horizon of several years. We not only prognose the end result of the scenarios, but give advice on which road to take as well. For an example of a potential analysis see here.

Strategic decision making
Sports organizations are faced with numerous strategic choices. Although, the earlier mentioned example are considered our expertise, we are willing to support your organization with other – but related – strategic choices as well. In 2018, for example, we worked on project for PEC Zwolle to determine the required financial investment to realize its ambitions towards 2024 (see here). Other examples of strategic projects are the aviation program for football (see here) and determining the value of Dutch football (see here).